Growing up in a village near the Fijian city of Lautoka, Dr Isaiah Immanuel witnessed first-hand the poorer outcomes for people living with chronic disease caused by delays in care and treatment.

Now, the medical graduate and father-of-five is shining a light on the inequities of care that Pasifika youth in Aotearoa New Zealand are struggling to overcome in the management of their type 1 diabetes.

Based at the University of Otago, Christchurch, he is conducting a one-year study, funded by Research for Children Aotearoa, to discover why Pasifika youth with type 1 diabetes are experiencing problems maintaining good control of their disease. 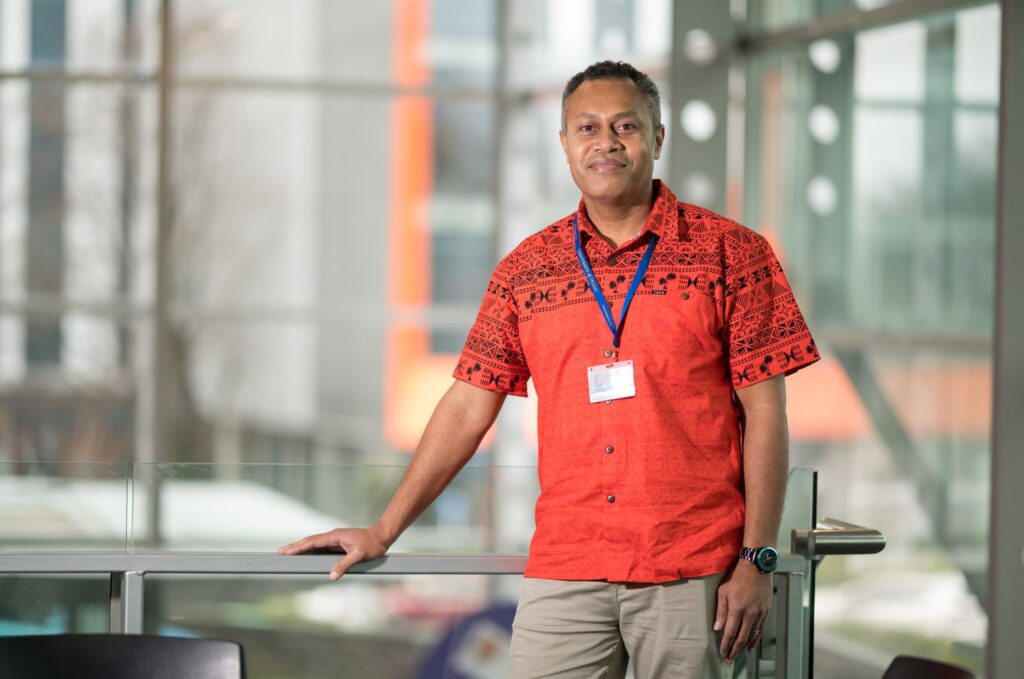 Shoulder-tapped by Paediatric Department leaders Dr Kiki Maoate and Associate Professor Tony Walls to take a year out from clinical work to complete the study, Immanuel says the opportunity has ignited his interest in child research.

So far, his findings suggest poor diabetes control for many young Pasifika patients.

“In many cases it’s not so much a lack of resource, but a lack of engagement or ability to engage,” he says. “It seems many families aren’t able to utilise the clinical support systems already in place to help manage their child’s disease, such as attending regular clinic visits or staying in touch with the clinical team. That begs the question why is this happening? We need to get to the bottom of the why, then we can fix it.”

Utilising the Department’s paediatric endocrine data, study results gathered so far suggest there has been little progress from five years ago in three key areas; the HBA1C glucose markers in the patient’s blood; patient use of insulin pumps; and their regularity in receiving continuous glucose monitoring.

“Five years ago, Pasifika children and youth were four to five times less likely to be using their insulin pump for glucose control compared to European New Zealand patients. Analysis of the current data shows only around one in seven Pasifika patients are using an insulin pump, which is still low.”

“Continuous glucose monitoring is another issue. Having access to a monitor can save the young person from the pain of having to prick their finger to extract blood five to six times daily. The fact is, most Pasifika families struggle to afford one of these monitors. The cheapest on the market is around $4,000 with some up to $10,000. The database shows our young Pasifika patients are five times less likely to be using continuous glucose monitoring as a result.”

Immanuel says these disparities matter. While there may only be an estimated 115 Pasifika children and teens with Type 1 diabetes patients in Aotearoa New Zealand (making up 7 per cent of total paediatric disease incidence) their levels of hospitalisation due to a lack of diabetes control are higher than they should be in percentage terms.

“A lack of disease control can be life-threatening. In type 1 diabetes the body cannot produce the insulin it needs to utilise the glucose we get from food. This causes glucose to hang around the body longer in toxic concentration levels which are harmful over time. If children don’t get their insulin, they can present to hospital very sick and even die within a week. Long-term they can lose their sight, kidney function and suffer nerve damage.”

Immanuel says his interviews with specialist paediatric diabetes nursing teams in Auckland and Wellington have been invaluable in exposing the challenges some Pasifika families face in accessing vital care and support.

“Type 1 diabetes management requires a lot of management and often both parents work long, unsociable hours. Although some services are government funded and already at the table, some Pasifika families are struggling to even get to the table.”

Immanuel says specialist diabetes nurses are reporting difficulties engaging with some families due to language and cultural barriers.

“Nurses are at pains to ensure the care they are delivering is culturally appropriate to that family. They say there can be feelings of shame and embarrassment from parents in having to admit they aren’t coping with the demands and oversight required to keep on top of their child’s health.”

He hopes the results of his study will help suggest a model of care aimed at bridging the gaps for Pasifika families.

As featured in University of Otago’s He Kitenga magazine.